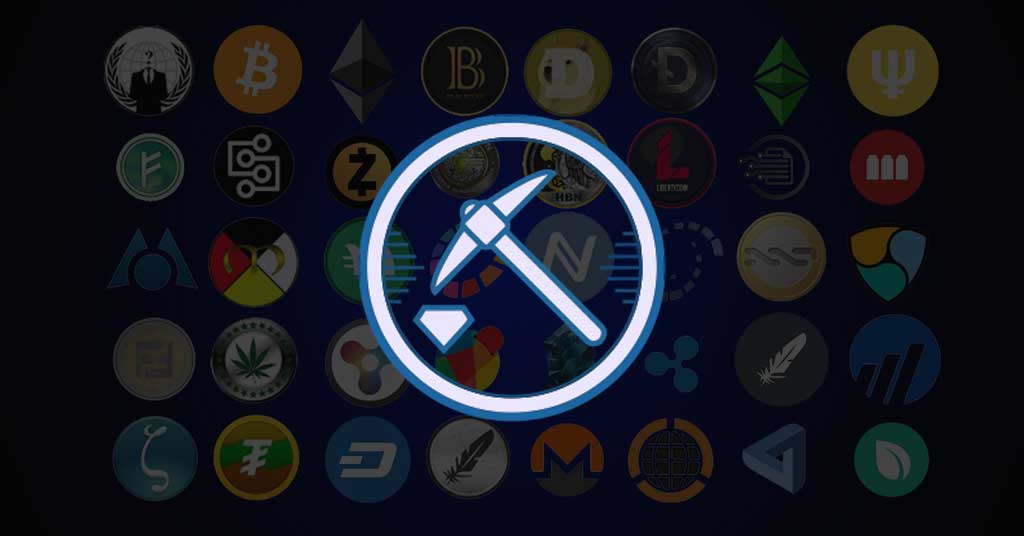 With Bitcoin surging, alt-coin prices are also trending up. While mining bitcoin on an individual computer is no longer viable, there are other cryptocurrencies that you can still mine at home if you’re prepared to put in the effort.

If the volatility of investing in cryptocurrencies is too much for you but you still want to benefit from the new economy, setting up a small cryptocurrency mining operation at home maybe be the right choice for you. Just make sure to keep an eye on your electricity costs as they will start to increase as you start to mine. Additionally, it may serve you well to download software that will help you monitor heat levels as excessive heat damages graphics cards. A good choice is the MSI Afterburner.

The easiest cryptocurrecny to mine is one that doesn’t require you to build a massive mining rig. Although it was initially possible to mine Bitcoin using laptops and desktops, the growing mining difficulty as well as the advent of Application Specific Integrated Circuit (ASICs) software created specifically for bitcoin mining has made it all but impossible to profitably mine Bitcoin at home using the processing power of a PC or laptop computer. However, crypto mining from home is still an option for some other cryptocurrencies in 2021. In this article, we will introduce 10 popular options — with some how-to instructions to help get you started.

Launched in 2016, Zcash (ZEC) is a leading privacy-centric digital currency. For the home miner, Zcash’s most important feature is that it employs the Equihash algorithm which is designed to be ASIC resistant. As a result, the home miner with a GPU can participate.

Ethereum’s ether (ETH) is the second-largest cryptocurrency by market capitalization and it is still possible to mine this cryptocurrency at home with the aid of GPUs equipped with sufficiently powerful graphics cards.

At-home miners should maximize their revenues both by acquiring the most powerful graphics cards on the market and by joining a mining pool. Mining ETH is a relatively simple process. The first step is to download the blockchain from the official website in order to set up your wallet. Afterwards, set up your wallet to mine by changing a few settings on your node. Once mined, exchanges that trade Ethereum include Binance, Bitmex, Bitfinex and BTSE.

Monero (XMR) is a popular anonymous digital currency. Furthermore, this altcoin’s network was designed specifically to resist the development of Monero specific ASIC’s. Therefore, it is well-suited for mining with a home computer. To begin, you must first download a wallet to store your coins. It is recommended to use the official Monero GUI client. Following this, the next step is to download mining software that supports Monero such as MultiMiner. MultiMiner is among the easiest to use but there are also mining options available online. Once mined, exchanges that trade Monero include Binance and Bitfinex.

Though the digital currency started out based on a meme, Dogecoin (DOGE) has grown to be an altcoin with a substantial user base. DOGE is designed to add new coins each year as opposed to bitcoin’s finite supply. This is an added incentive for anyone mining it. To mine DOGE, first ensure you have a wallet to store your earnings. You can download the Dogecoin core wallet or look on the website for other suitable online wallets.

When mining using your CPU, the software that works best is CPU miner. Mining in this manner is possible, albeit at a slow rate. To increase the mining speed, you can use graphic cards. AMD and Nvidia cards are your best bet. If you decide on GPU mining, then the software that you should use is either the cgminer or cudaminer.

Full instructions for mining Doge can be found here. While mining as an individual is doable, it is advisable to sign up to a mining pool as you are able to take advantage of the larger processing power and speeds and thus generate higher mining returns. An examples of a mining pool that supports Dogecoin is MultiPool. Once mined, exchanges that trade Dogecoin include Binance and OKEx.

Grin (GRIN) was launched in January 2019. The project showcases a keen focus on privacy and scalability. The Grin blockchain employs the MimbleWimble algorithm to support transactional privacy.

For the home miner, though, it is the blockchain’s ASIC-resistant POW algorithm that is most relevant. Moreover, the project developers have gone a step further to hard code a hard fork every six months to minimize the effects of any ASICS that may be developed specifically for its network.

Grin supports both CPU and GPU mining. However, if you decide to go the GPU way, purchase Nvidia cards because these are considered more effective. Moreover, you must have a minimum of 5.5 GB space to begin mining the coin.

To get started with “GRINning”, download the blockchain from the official website to set up a node. Once you have successfully synced the blockchain, you must connect the node to your wallet. Creating your wallet is a simple matter of running a file in the directory. Once the wallet is live, you must then configure your graphics cards to work with the wallet. Finally, remember to set the software to the Cuckaroo POW, which is the version of the Grin network that supports GPU mining. Once mined, exchanges that trade Grin include Bittrex and HitBTC.

Another MimbleWimble implementation, Beam (BEAM) is well-suited for home mining. It employs the Hashii algorithm that supports GPU mining.

To get started, download the official Desktop Wallet, depending on the operating system on your computer. Your antivirus may flag up the mining software as a harmful program. Exclude it from that designation otherwise you will run into trouble in the mining process.

Once the blockchain has downloaded and synced you are ready to start mining. You must first configure your settings. Turn on the “Run Local Node” feature and set the number of mining threads to a number greater than zero.

It is important to note that Beam’s infrastructure involves the use of expiring addresses in order to maximize privacy. However, you will require a permanent address to successfully recover your mining revenues or your tokens will be lost. To create a permanent address, navigate to the receive tab on the main dashboard of the software. You can create a new address and set it to never expire which you can use for the mining set up. Once mined, exchanges that trade Beam include Binance and Bitforex.

Anonymous cryptocurrency Bytecoin (BCN) is another altcoin that is easy to mine on your home computer. Solo mining has been designed to be an easy process for Bytecoin users. All you need to do is download the Bytecoin wallet and run the program on your computer. After the program is done syncing with Bytecoin’s blockchain, create a wallet for yourself. Then simply input the begin mining command and set your wallet address as the recipient.

Solo mining works on Bytecoin’s network, however, the process is slow and may not get you much revenue. To enhance earnings, you can join a mining pool that supports CPU mining. A good example is bytecoin-pool.org. You will also need to download compatible mining software such as xmrig.

It is also possible to mine Bytecoin using GPUs. To mine in this manner, you will need to download software that is compatible with GPU mining. While the set-up process here is more complex than with CPU mining, it does lead to a faster mining process. Once mined, exchanges that trade Bytecoin include HitBTC and Poloniex.

Launched in 2014, Vertcoin (VTC) is another popular choice among small miners. The digital currency is designed to stay true to the spirit of decentralization and financial sovereignty envisioned by Nakamoto when he created Bitcoin. The project’s developers created the blockchain as a response to the growing influence ASICs were having on the Bitcoin blockchain and the mining ecosystem in general. The algorithm employed with Vertcoin’s POW consensus mechanism is Lyra2RE and is designed to be ASIC resistant while simultaneously supporting GPU and CPU mining.

VTC is popular because it has a very simple mining process. It is a matter of one click as the project developers have created the architecture to support easy mining. To start mining, download the software here, and join a mining pool to maximize mining revenues.

Once mined, exchanges that trade Vertcoin include Bittrex and UPBit.

The main goal of the Ethereum Classic project was to ensure survival of the original Ethereum blockchain, to provide an alternative for people who strongly disagreed with the DAO bailout of Ethereum and the direction taken by Ethereum Foundation. While ETC can be mined with ASIC machines, it can also still be mined on desktop machines. A full list of mining resources for Ethereum Classic can be found here.

Once mined, exchanges that trade Ethereum Classic include HitBTC, Binance and Huobi Global.

AEON was originally forked from Monero and based on the CryptoNote protocol. It uses the CryptoNight-Lite algorithm and ring signatures to make sure that transactions are untraceable. AEON can be mined with Windows CPUs, and AMB and Nvidia GPUs.

Once mined, Exchanges that trade AEON include Bittrex and HitBTC.

Mining by at-home miners is challenging as large-scale operations dominant the mining industry. However, by choosing the most profitable coins and running the latest (and most efficient) mining hardware, it is still possible to generate crypto mining profits in 2021.

Go to What To Mine official website and test your specific mining device.